10 Things Your Doctor Won’t Tell You About Endometriosis.

If your gynecologist says it’s time for a hysterectomy, you’ll need to know what it could mean for your sex life, your hormones, and your future before you agree.

Although hysterectomy is one of the most common surgeries for women living in the United States, myths about removal of the uterus abound.

As many as 600,000 American women have hysterectomies each year, estimates the U.S. Centers for Disease Control and Prevention. If you are about to be one of them, a frank discussion with your gynecologist is essential first.

In days long past, hysterectomy was used as a treatment for women with “hysteria” — a broad diagnosis that covered symptoms like anxiety and depression.

Now, hysterectomy is one of many options if you have fibroids (noncancerous tumors), excessively heavy periods, or uterine prolapse (a dropped uterus). Hysterectomy could be a real medical necessity, not simply another option, if you have invasive cancer of the reproductive organs — the uterus, cervix, vagina, fallopian tubes, or ovaries.

Unless you ask, certain critical and highly sensitive topics might not come up when you discuss hysterectomy pros and cons with your doctor. So speak up and get specific. Find out what a hysterectomy could mean for your sex life, your hormones, and your future.

Here are 10 things your doctor might skip, but that you need to know.

1. Your sex life isn’t over. How soon you can have sex after a hysterectomy really depends on the type of hysterectomy: partial, total, or radical. Waiting two to four weeks to get back to sex is generally okay, with your doctor’s go-ahead, if your cervix was not removed along with your uterus, says Lauren Streicher, M.D., Everyday Health columnist, Associate Professor of Obstetrics and Gynecology at Northwestern University in Chicago, and author of Love Sex Again. But if your cervix was removed, it takes about six weeks for the back of the vagina to heal.

In fact, endometriosis — a condition marked by severe menstrual cramps, chronic pain, and painful intercourse — is not cured by removal of the uterus, according to the Office on Women’s Health at the U.S. Department of Health and Human Services. And of the many treatment options, which include pain medications and hormone therapies, hysterectomy with removal of the ovaries as well, is not a first line treatment. Conservative surgery using a minimally invasive method may be one option, and will preserve the uterus. Cohen’s hysterectomy at age 28, recommended by her gynecologist, did not even diminish her endometriosis symptoms.

3. You won’t necessarily go into menopause. “I expected to have crazy hot flashes, mood swings, and night sweats all of the time, and was pleasantly surprised to find out that I barely had any of those symptoms,” Cohen says about her experience after hysterectomy.

The myth about hysterectomy Streicher hears most often in her medical practice, is that a woman will go into menopause afterward. You won’t have periods, and can’t get pregnant after your uterus is removed. But that doesn’t necessarily mean menopause. Streicher explains, “The only one who will have menopause is a woman who has her ovaries removed during the procedure and was not in menopause already.” If surgery is limited to the uterus, timing of natural menopause may not be affected.

4. Hysterectomy may include your ovaries. During surgery, your doctor may remove one or both ovaries and your fallopian tubes, as well as your uterus. Ovaries are the source of the female hormones estrogen and progesterone. These are critical for both sexual health and bone health. Losing both ovaries means these hormones are also lost abruptly, a condition known as surgical menopause. This sudden loss of female hormones can cause stronger symptoms of menopause, including hot flashes and loss of sex drive.

5. Hormone therapy could help with physical changes after surgery. If you have a hysterectomy that removes your ovaries, then you should talk about the pros and cons of estrogen therapy with your doctor, Streicher says. After the ovaries are removed, estrogen therapy can help relieve uncomfortable symptoms of menopause. However, oral hormone therapy carries increased risks of stroke, blood clots like deep vein thrombosis, and heart disease, which you should also discuss with your doctor.

6. You may be able to avoid a hysterectomy. Depending on the condition you are facing, you may be able to keep your uterus intact. Alternatives are out there for about 90 percent of hysterectomies surgeons do, according to Streicher in her Essential Guide to Hysterectomy. Fibroids, for example, may be treated using a nonsurgical procedure called uterine artery embolization that cuts off the fibroids’ blood supply. Another option to treat fibroids is myomectomy, which removes fibroids but spares the uterus. For heavy bleeding, an ablation procedure — which freezes or burns the uterine lining — may be a treatment option. Before scheduling a hysterectomy, have a discussion with your doctor about the alternative treatments for your condition.

RELATED: 10 Cancer Screenings Every Woman Should Know About

7. Less invasive surgery may be the right option for you. Ask your doctor about minimally invasive surgery, also called laparoscopic or robotic-assisted hysterectomy. This newer type of surgery requires general anesthesia but only uses tiny incisions, causes less blood loss, and comes with shorter hospital stays. Laparoscopic surgery is used about 45 percent of the time now for hysterectomy, according to Streicher. However, not all gynecologic surgeons offer it. Recovery is quicker, with fewer complications, she says. If your doctor indicates that you are not a candidate for this type of surgery, then ask, “Do you do a lot of minimally invasive surgery?” If they don’t, Streicher notes, it could be them, not you, who isn’t right for one of the newer procedures.

8. The morcellation technique has both advantages and risks. To be able to remove the uterus during a minimally invasive surgery, surgeons cut it into small sections and may use a process called morcellation. Recently, the practice was criticized because of evidence that it could potentially increase the risk of spreading cancerous cells. In response, one manufacturer stopped selling their morcellator devices and recalled them, the Washington Post reported.

“Morcellation doesn’t cause cancer,” explains Streicher, “but if the person had a specific kind of cancer, you could potentially spread the cancer by morcellation.” This type of cancer is extremely rare, Streicher adds. A recently published report found that only 27 out of 10,000 women would be at risk. Informed consent is a must before going ahead with this procedure, says Streicher.

9. Hysterectomy may prevent certain types of cancer. For women who have BRCA1 or BRCA2 gene defects, risks of developing ovarian cancer are much higher, according to the National Cancer Institute. Only about 1 percent of women who do not have BRCA1 or BRCA2 get ovarian cancer, compared with 45 percent to 65 percent of women who have the mutations. In some cases, after genetic testing, women with BRCA1 or BRCA2 choose to have a preventive surgery. This removes both ovaries, called prophylactic oophorectomy, and can be done either alone or at the time of hysterectomy. Studies show having the surgery lowers risk of dying from ovarian cancer by 80 percent.

10. Psychological healing after hysterectomy can take time. For some, the emotional trauma of hysterectomy may take much longer to heal than the physical effects. Feeling a little down or having a sense of loss after a surgery is normal. But be on the lookout for postoperative depression and get professional help if you need it — to deal with insomnia, loss of appetite, or hopeless feelings, if you have them.

“I have to struggle with the heartbreaking reality that I can no longer menstruate or have children,” says Cohen. For her, the hysterectomy was an emotionally painful experience. “Each woman who undergoes one deals with it in a way that is uniquely hers,” she says. 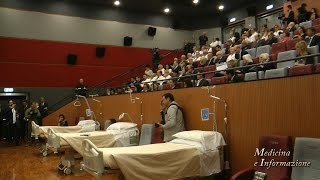 10 Things Your Doctor Won’t Tell You About Endometriosis.